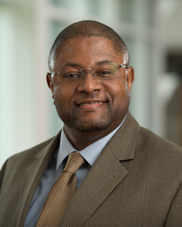 College of Arts and Sciences

Justin Boyce is a native of St. Thomas, United States Virgin Islands. The Virgin Islands was bought by the U.S. from Denmark in 1917 because of the islands’ strategic location to the Panama Canal. Currently, the U.S. Virgin Islands (St. Thomas in particular) is one of the Caribbean’s most sought after tourist destinations featuring beautiful crystal clear blue water and shimmering white sandy beaches with warm, loving and generous people. The Virgin Islands is dubbed, “America’s Paradise” and attracts people from all 4 corners of the globe.

After completing high school at Charlotte Amalie High, Justin Boyce attended the University of the Virgin Islands (UVI) and obtained a Bachelor of Arts degree in Psychology. As a part of his undergraduate success, he received the Eldra Schultebrandt Psychology Award for being the most outstanding undergraduate Psychology student. He also completed a Master of Arts Degree in Education: Counseling & Guidance, at UVI. Upon completion of his master’s degree, Justin Boyce received an academic award from the American Counseling Association (VI Chapter) for having the highest grade point average in his major.

Justin Boyce then attended West Virginia University (WVU) in Morgantown, WV where he pursued and successfully earned a Doctoral degree (Ph.D.) in Counseling Psychology. He attended WVU as a WEB Dubois Scholar his first year and then subsequently as a WEB Dubois Fellow. Both the WEB DuBois Scholarship and the WEB DuBois Fellowship are competitive academic awards that recognize outstanding students. These academic scholarships allowed him to focus on his doctoral studies full time and he was able to maintain a perfect 4.00 GPA despite the rigorous and demanding nature of his training program.

Currently, Dr. Justin Boyce is serving as a Professor of Psychology here at Indiana Tech and said that he has a “fire in his belly for teaching and learning”. He has often indicated to his students that he absolutely “loves psychology” and sees it as the stuff that life is made of”. His teaching style is very energetic, robust and applied and Dr. Boyce prides himself on helping students recognize how Psychology impacts their lives on a daily basis. He takes the subject matter out of the text book and motivates and challenges his students to see its application to everyday situations. He teaches a variety of courses to include: Abnormal Psychology, Advanced Abnormal Psychology, Health Psychology, Forensic Psychology, Theories of Personality, Theories of Counseling, Social Psychology, Human Growth & Development, Interview Strategies for Helpers; Group Dynamics; Research Methods; and Introduction to Psychology. He coordinates the Psychology Program and also teaches in the College of Professional Studies.

As a part of his career, Justin Boyce has engaged in grant-writing and has had success with obtaining funding for his research and service projects. Of note is a grant a he received several years ago for $360,000 to support his initiative to develop Secondary and Tertiary Mental Health Prevention Treatment Programs for Returning Operation Enduring Freedom and Operation Iraqi Freedom Veterans. Not only did Boyce write the grant proposal that resulted in the grant funding, he also developed and implemented the clinical treatment program for veterans in the tri-state catchment area. He received recognition awards from the VA System for both the success of his grant-writing and also for the success of his development and implementation of the treatment program that served Iraqi and Afghanistan veterans who had been in theater serving on the front lines.

Justin Boyce is married to his wife, Bren, for the past 24 years, and they have two sons, ages 22 and 14. Justin Boyce enjoys gardening and has been successful with growing Okra, Carrots, Squash, Peas, Tomato, Peppers and herbs, to name a few. He reports trying his hand at corn a few years ago. Justin Boyce is known to be a really good cook and enjoys making Caribbean and American cuisine.

He loves to travel and has visited many places in Europe such as Rome, Venice, Florence, London, Switzerland, and Paris. He has traveled throughout the contiguous United States and visited many islands in the Caribbean. His favorite place, next to sitting on a Beach in St. Thomas, is Lucerne, Switzerland, which he describes as having wonderful people, beautiful mountainous terrain and clean, crisp air. He reports feeling “so alive” when he visited there. As a part of his civic duties, Dr. Boyce co-facilitates a bereavement support group at St. Vincent de Paul.

He lives by the motto, “Think Big” and credits his many successes to the encouragement and support of his mother and maternal grandmother who helped foster his belief that the Sky is the Limit and that even then, we should not limit our successes to even that of the sky.